Update: Help demand #JusticeForElisha and an end to violence against #WLHIV

on 02 September
For many, this is a joyous week.  Labor Day just passed (yesterday) and the long weekend provided much-needed rest for those who were fortunate enough to have the day off.  Also, for a lot of families, today was the first day of school - an exciting time for a fresh new year of learning.  Additionally, it is now September, so several people are looking forward to the crisp winds and colorful leaves that usher in autumn.  For my family, September is a month of birthdays; my daughter this weekend; my son next week; and my two brothers the week after that.

However, September 2014 is anything but joyous for the grieving family of Elisha Henson.  The beautiful young HIV+ Texas mother, who would have turned 31 years old this Friday, was brutally murdered this spring because of her HIV status.  Instead of celebrating with their mother this weekend, her young sons and her family are mourning her loss.  Elisha was killed because of irrational fears and stigma surrounding HIV; the man who murdered her had virtually NO chance of contracting HIV from her and had NO right to end her life.

Today, her killer and his accomplice have been indicted for Elisha's murder in Angelina County.  As things progress in this case, I am calling upon you pleading for your help.  Please do not let Elisha's death be in vain.  I implore you to stand with us.  We demand #JusticeForElisha.  The family deserves answers and they deserve to see that justice is served.  With our voices, we can let them know that we care.  There are some advocacy tools that have been created to help anyone who is willing to take a few moments to help; they are available here on this post on the Positive Women's Network-USA (PWN-USA) website and I'll also link them at the end of this.  Inside the link are several ways to help advocate; the most pressing one right now would be for you to download the Letters to the District Attorney, modify them as needed, and please send.

Why do we need to send letters to the DA when we don't live in that county, you ask?  Because we NEED to show that there are MANY people around the nation watching to make sure this case is handled fairly.  We need to stand in solidarity with Elisha's family in her memory and in the memory of the many positive women living with HIV who have experienced intimate partner violence (more than 50%) in the US alone.  Such stats are unacceptable; even one woman is one too many.  If we are silent, we are indirectly condoning the continuance of violence.

If we speak out, we can help make sure that there is appropriate attention paid to the facts of this case in hopes of making sure that due process occurs.  In the real world, we have all seen that there are many times in which "sympathy" comes into play, increasing the likelihood that charges are reduced and/or "slap on the wrist" plea-bargains are offered.  This happened just yesterday in the case of Kelli Stapleton (a Michigan mother who tried to kill her autistic daughter Issy), whose "attempted murder" charges were reduced to "first degree child abuse."  All over the media, articles, op-eds, and blogs reiterated that it was "understandable" how she was "driven" to such a violent act out of "desperation," and portrayed teenage daughter Issy as a violent, out of control monster whose "loving" mother had endured more than she could take. It's not too much of a stretch of the imagination to assume that there could be people who sympathize with Elisha's killer as well for his unfounded fears of "catching" HIV even though it was virtually impossible.

There is another important way that you can help also, in addition to sending letters.  PWN-USA will host the first ever National Day of Action to End Violence Against Women with HIV, which has been inspired in part by Elisha's unnecessary murder and that of Cicely Bolden, another young HIV+ Texas mother who was similarly murdered two years before.  The day of action will occur on October 23, 2014, coinciding with National Domestic Violence Awareness Month.  PWN-USA is hosting a planning call for the Day of Action this Thursday on the day before what would have been Elisha's 31st birthday.  You can join the call to find out how to lead an event in your area.

Finally, the July PWN-USA link also provides other ways you can show support, such as sending supportive online messages to Elisha's family and/or kind letters to the family, and a sample letter for reporters whom have been respectful in covering this case, such as Jessica Cooley (jcooley@lufkindailynews.com), a local reporter whom has written several articles about Elisha's murder since the spring.

Thank you for your support.  Together, we can help stop the cycle of violence and can work to obtain #JusticeForElisha. 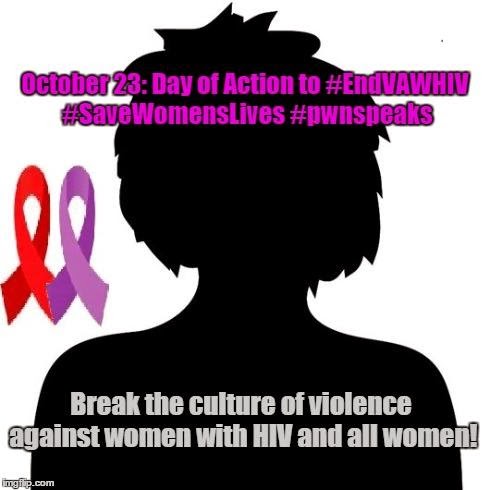